Limp bodies lined the hallways of Essex Street Academy, a public high school on the Lower East Side of Manhattan, during Bunny Rogers’s Sanctuary. It was the first live performance by the artist, who is known for videos and installations that often employ cute objects with dark twists, complicating notions of innocence. Commissioned by Performa, a New York biennial of performance art, Sanctuary ran twice on November 16th. The actors were adorned with fake wounds made using cheap Halloween makeup. Their clothes were drenched in bright red fake blood. Among the dozens of limp figures was a young couple, po­sed as if they had just died in one another’s arms. The scene was dramatically and colorfully lit, fake snow fell from the ceiling, and machine-made fog filled the school’s gym. 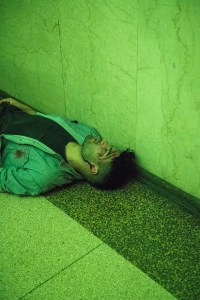 The haunting scene Rogers created was campy, but the set was a very real school. There were, for instance, real inspirational quotes that real high school teachers had written in bubble letters on construction paper, then taped to their classroom doors. One read, “Everything will be okay in the end. If it’s not okay, then it’s not the end.” The quote didn’t hold up well in the context of Sanctuary. There was no trace of a gun or bullets, but the whole simulated ordeal unmistakably evoked the aftermath of a mass shooting. Even though the carnage of a shooting is rarely shown on the news, we know this scene.

Real flowers dyed fake colors (blue roses, a black wreath) decorated the entryway to the school. Despite all the artifice—or maybe even because of it—the tableau hit like a punch in the gut. The first stage of grief is denial: confusion as to whether the death or tragedy really happened. The Sanctuary setup was likewise not to be believed and yet all too real. It felt real not because a shooting actually happened here, but because they happen all the time. Walking through the high school, I found myself on edge, fearful that Rogers intended to turn the performance into an active shooter drill by simulating a shooting. The haunted house vibes made a scary surprise seem immanent, and intensified the familiar anxious anticipation: who’s next? I’m extremely relieved to report there was no such simulation. 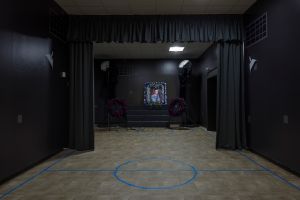 Bunny Rogers’s installation Being There, 2017, at the Louisiana Museum of Modern Art, Humlebaek.

The twenty-nine-year-old artist is not a school shooting survivor, but rather someone who has grappled with destructive and suicidal fantasies from a young age. The media frenzy that followed the mass shooting at Columbine High School in 1999 was a formative moment in her childhood, she told me when I profiled her earlier this year. She often recreates high school interiors in her installations and videos. Her 2014 and 2016 installations at Société gallery in Berlin evoked the Columbine library and cafeteria, respectively. At the Louisiana Museum in Denmark in 2017, she staged a fictional funeral for herself, transforming one of the galleries into a somber high school gym: there was a portrait of the artist framed by flowers, and the basketball hoops were draped in black fabric. She’s fascinated with how our culture romanticizes dying young. For instance, in 2013, with her frequent collaborator Filip Olszewski, Rogers created a multichannel sound piece that sampled audio from YouTube recordings of various young girls singing The Band Perry’s song “If I Die Young,” whose chorus begins “if I die young / bury me in satin / lay me down on a bed of roses.” In Rogers’s and Olszewski’s rendition, the girls form a virtual chorus, all fantasizing about being tragically unique according to the same script. 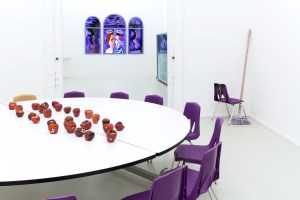 Just as singing together can sometimes aid in processing difficult experiences, Sanctuary created a space for confronting collective grief. But it also risked traumatizing visitors. How can an artist comment on grief without instrumentalizing it? Conspiracy theorists have stalked and harassed the parents of murdered children, and politicians have exploited suffering in the aftermath of mass shootings to support a wide range of agendas. Who was Rogers to take up the subject as performance art? Who was I to take in the spectacle she created? Survivors and surviving loved ones have to live through a pain that few of us can imagine. At the same time, many more of us have to cope with living in a country where mass shootings happen more than once per day. For me, Sanctuary provided a space to grapple with the threat of gun violence that always looms.

As the performers lay pseudo-slain in the hallway, the artist and her friends played musical instruments in the auditorium in what was billed as a talent show rehearsal. Rogers sang sad songs while Olszewski mixed tracks on a laptop. I’m pretty sure I heard a sample from the 2005 song “Sugar We’re Going Down,” an emo anthem from Rogers’s teenage years by the band Fall Out Boy. Later, Olszewski performed a screamo song, emphatically shouting into a microphone: “You’re all the same!” On the piano, Allese Thomson, a former Artforum editor, gave a performance that recalled Rogers’s 2016 animated video Mandy’s Piano Solo in Columbine Cafeteria, which shows a cartoon Mandy Moore playing Elliot Smith songs in a snow-laden Columbine cafeteria. 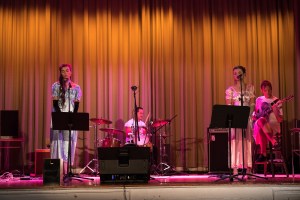 The two distinct scenes in Rogers’s spectacle—one centered on death, the other on entertainment—happened simultaneously, but it wasn’t clear if they were meant to exist in the same spacetime. Were Rogers and her friends really posing as teens holding band practice while all their classmates lay dead? But the seemingly dissonant pairing may have captured the complexity of teen emotional experience, with screamo offering an alternative to violence as a means of channeling angst. Perhaps the talent show, and all the anxiety such performances can generate, represented the type of drama that young people ought to be concerned with—not the imminent threat of getting shot.

In its melding  of death and entertainment, Sanctuary reminded me of the 2018 film Vox Lux starring Natalie Portman, who plays pop singer who survived a school shooting as a teen: a talent agent mines her trauma to make her a star. She always wears a satin ribbon around her neck to cover up her scar. Satin ribbons are also Rogers’s signature. They capture a sort of girly innocence—and, implicitly, its inevitable sullying. Olszewski donned a black satin ribbon on his guitar during one of his talent show sets. Pale pink ones lined an earlier work by Rogers, Allese (Mourning Mop), 2015, a depiction of Thomson in the form of a mop. Mops figure in Rogers’s work as objects that can only absorb so much before they start contributing to the mess—a metaphor for dealing with trauma.

As the next presidential election nears and mass shootings continue to occur with tragic regularity, it feels urgent to counter the disappointing responses of politicians. Across party lines, candidates have posited not guns, but mental health as the primary threat, despite the fact mass shootings by mentally ill people represent less than 1% of all yearly gun-related homicides, and only one in five show evidence of psychosis. The other eighty percent “have many of the problems that nearly everyone has to manage at some point in life: anger, isolation, depressive moods, resentments, jealousy,” according to a recent New York Times report. These were the very emotions being navigated in the talent show, in fact they are the very quintessence of teen experience.

While Rogers has poignantly addressed topics like pedophilia and school shootings for years, I hadn’t previously considered her a “political” artist. Sanctuary didn’t address policy or present statistics, but instead provided a deeply moving, if rather awkward space for collective grieving. Is that “okay?” I don’t know. How do you critique someone’s grief?